'Budget should have focused on transport costs'

WITH THE increase in the shipping freight rates being one of the contributors to infla tion, the Shipping Association of Trinidad and Tobago said there should have been more focus placed on the relationship between transportation costs and domestic inflation during last week Mon -

Speaking at the Shipping Association's post-budget forum last week, the associa tion's president Hayden Alleyne said while he understands the focus on small and medium-sized enterprises (SMEs), freight rates, along with other factors within the shipping industry, should have been addressed.

'The issue of duties and Value-Added Tax (VAT) on imported goods, is a contrib -

utor to inflation and I thought the Govern ment should have paid more attention to that,' Alleyne said.

bert, announced a public-private-partner- ships (PPP) for the Port Authority of Trin idad and Tobago's operations two years ago, it's not clear what this proposal is do- ing for port capacity for the ships docked.

Another issue Alleyne raised was the floating dry dock at Chaguaramas, which sank in August. While he said Imbert mentioned it during his budget presentation, nothing detailed was forthcoming.

'I thought more emphasis could have been placed on this as well, as both domestic and international owners use the CL Marine as a major port facility to dry -

dock their vessels. "This facility is also owned by the Gov - ernment and with the floating dry dock sinking, it can affect foreign exchange coming into the country,' he outlined.

Alleyne said some of the challenges the industry continues to face include; foreign exchange; port capacity and productivity; Customs and Excise as well as other statu tory bodies, training, technology and data.

Alleyne said the budget had some positives, but he said, of course, some people would not have been pleased with some measures taken.

'As with this budget and the others that went by in the previous years, the budget is only as good, once what was announced is actually executed. The budget can only stand the test of time with actual imple- mentation," he remarked.

Also speaking on the panel was EX -

In his budget presentation Imbert, assured the business community that in 2023, the EXIMBank will expand its foreign exchange facility and provide even greater access to this targeted foreign exchange. window "The benefits are clear and have signifi cant domestic and global impact. International supplier relationships have contributed to this positive development, facilitating the smooth flow of inputs for the manufac turing sector as a vibrant generator of sustainable employment,' he outlined.

According to Imbert, 87 importers have accessed a total of US$488 million to supply the nation with food, pharmaceuticals, sanitary products, personal protective equipment, and other essential supplies through the essential items forex window.

Dookeran said it was announced at the Trinidad and Tobago Manufacturers' Asso - ciation (TTMA) post-budget conference last week, that EXIMBank is raising its rates on US dollar lending and this is as result of a rise in global interest rates.

'The Federal Reserve in the United States has increased interest rates by 3 per cent and the markets expect another 0.75 per cent in - crease in November. The EXIMBank has been absorbing the additional cost, but can no longer do so,'he explained.

Dookeran told the Shipping Association that it should seriously look at exporting its services in order to earn more foreign exchange.

"While I know some shipping companies are already in the business of exporting, I encourage more to enter the business. While it would take some time to understand the logistics, it will be beneficial in the end," he said.

Dookeran added that trade is an ecosys -

tem and all industries should look at col laborating more, to help the ease of doing business. 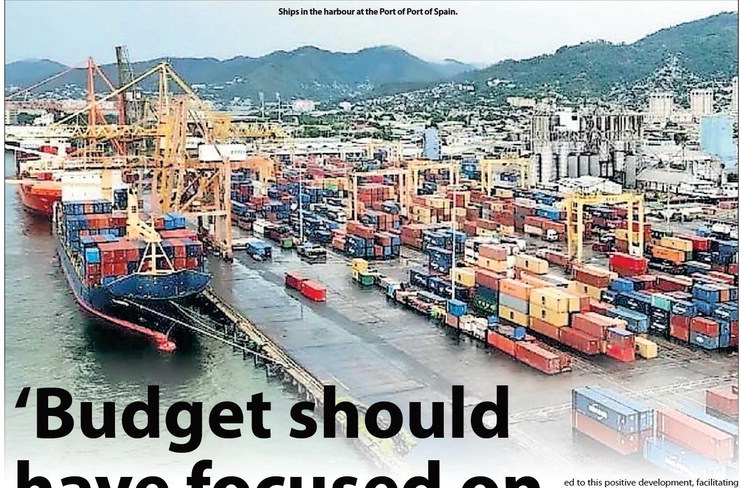 Ships in the harbour at the Port of Port of Spain.