'That contract was reviewed extensively by the Cabinet and it has been stopped. HDC has been instructed to go back out to tender because there were some parts of that contract that did not meet Cabinet's acceptance and approval, both structurally and legally. That contract has been stopped,' Rowley told journalists at yesterday's post-Cabinet news conference.

Asked what he meant by stopped, the Prime Minister said: 'We are not going forward with it in the form that it was produced.'

Questioned if that meant the contract had been cancelled, Rowley responded: 'Cancelled yes.'

Under the first phase of the agreement, HDC agreed that CGGC would construct 439 two- and three-bedroom apartments at Lady Hailes Avenue in San Fernando and South Quay in Port of Spain for a contract amount of US$71.74 million (TT$485 million). The formal agreement to construct the 5,000 apartment units was signed at a ceremony at the Hyatt Regency (Trinidad) hotel on May 17, 2019.

The announcement of the cancellation of the largest state housing contract in T&T's history came eight days after Express Business published, in an exclusive story, key details of the benefits the Chinese contractor would have enjoyed under the agreement with the HDC.

• HDC agreed to use its best efforts to convert 60 per cent of the $485 million contract price to US dollars;

• HDC agreed to reimburse all of CGGC's VAT payables one month after each interim payment certificate. HDC agreed, in writing, to use its own funds to reimburse the Chinese contractor;

• HDC agreed to reimburse all of CGGC's corporate tax payments within a period of one month after the submission date;

• The contract also ensures that the Chinese contractor does not pay customs duty or import duties, and all other related fees or charges levied on the contractor during the performance of the project, in accordance with the laws of T&T. In the event that the exemption is not approved by any authorities, all above-noted taxes, duties, fees and charges shall be reimbursed by the HDC through its own fund resources;

• HDC was responsible for obtaining all permits, including tax exemption certificates, planning permission, work permits, permits to work and any other permits and approvals required for the project;

• While the Chinese contractor pledged to use as many local workers and materials as possible for the project, the contract makes provision for CGGC to be granted up to 600 work permits for Chinese labourers;

• HDC was responsible for obtaining all visas, resident permits and work permits;

• HDC also had the responsibility to provide 4.94 acres (two hectares) of land to serve as temporary housing for the up to 600 labourers;

• HDC, as well, was responsible for ensuring 24-hour security at the building sites for the contractor's personnel and property; 'During the execution of the project, at least one patrol car with two armed police shall be arranged for each site 24 hours per day by the local police station under the liaison of the employer,' the contract states;

The JCC said that it was 'alarming that such a flawed contract could have been prepared by the HDC in the first place and if it had been allowed to proceed, the people of T&T would have been severely disadvantaged'.

The JCC said: 'With a fully operationalised Office of Procurement Management, the Prime Minister and well-intentioned ministers would have the ably empowered institutional assistance to ensure proper, lawful procurement practices are carried out by various state agencies.'

Neither HDC chairman Newman George nor its managing director Brent Lyons immediately responded to telephone calls and messages from the Express yesterday.

An official at the Chinese embassy promised to call the Express back with a comment when the Prime Minister's comments were confirmed. 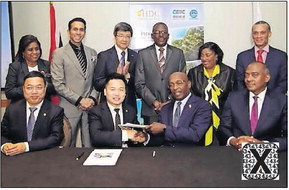