Coming out of the Covid- 19 pandemic and facing geopolitical tensions, the business groups want next Monday's budget presentation to place emphasis on economic recovery, stability and growth, along with implementing a national unique identifier and le gal digital identity.

The Express Business got the views from various chambers and associations on their recommen- dations for the 2022/2023 fiscal year.

The TTCIC hopes to see improvement in the ease of doing business through full automation of Customs processes and an acceleration of the digitisation efforts across the entire public sector.

The Chamber also called for an expansion of the e-tax payment facility to allow for online payments of under $100,000 and a more effi cient Value-added tax (VAT) refund system.

The chamber also called for revision of the 6 per cent tax on industrial properties to apply strictly to physical property and not the installed cost of plant, machinery and equipment inside or outside.

'To introduce a top line tax on businesses' revenues will become a serious disincentive for further investment in a time when the emphasis is to create an enabling environment for business growth,' It remarked.

The TTCIC also made the call to boost the entertainment sector by offering a 50 per cent discount on the use of state facilities/venues for cultural events and fetes until the end of 2023 to help the sector recover from the losses incurred during the pandemic.

'More partnerships with the private sector, as the events and Carnival bands executed by the private promoters have generated high demand by tourists and generated foreign exchange. Metrics related to the development of the Carnival product should be established for the use of the funds,' it added. Improve ease of doing business

Chief Executive Officer of the American Chamber of Commerce ofTrinidad &Tobago (AMCHAMTT) Nirad Tewarie said the chamber's budget recommendations were sent to the Ministry of Finance on July and he hopes the budget has clear objectives, progress reports on previous announcements and policies to facilitate an attractive business environment.

One of the many recommendations sent to the Minister of Finance, Tewarie said, was the need to accelerate the digital transformation agenda, which AMCHAM believes is key to Trinidad and Tobago's economic recovery and growth.

'This will require implementing the digital policy and data interoperability framework to enhance innovation and develop solutions to support citizen service delivery. We are aware that the Ministry of Digital Transformation has been working to increase its internal capacity and set the stage for what we hope will be a year of delivery, as the Government has repeatedly committed to these initiatives,' he highlighted.

AMCHAM also highlighted that more should be done to improve the ease of doing business.

Tewarie said, 'We must implement a fully automated Customs process by ensuring a functional integration with TTBizLink, increasing the use of the ASYCUDA platform, revamping customs hours, including tackling unnecessary overtime and redesigning locations to increase the efficiency at the airports and seaports.'

Over the years, Tewarie noted that several of AMCHAM's recommendations have either been actioned or announced as part of the government's agenda.

In 2017, he said the Chamber called for improved enforcement mechanisms to reduce 'illegal' cigarettes on the market, and revise taxation schemes in the cigarette industry.

'The Minister of Trade & Indus- try convened the first meeting of the Anti-Illicit Trade Task Force's working group on tobacco in March 2022.

The working group discussed several priority matters key to combating the illicit trade locally such as the estimation and identi- fication of the trade locally, current high levels of taxation and key recommendations to address the issue, Tobacco Control Regulations.'

Another recommendation in 2018, was the call to support research and development (R&D) in private companies through the allowance of a write-off of 75 per cent of the working capital used to support innovation against chargeable income tax, up to a limit of 2 per cent of a company's annual revenue in the prior year.

'In his budget reading in October 2021, Finance Minister Colm Imbert said the fiscal measure would cost about $25 million and benefit about 1,000 companies. Outside of the energy sector there is no such tax break.'

In 2020, Tewarie explained that the chamber recommended the removal of VAT from personal computers and other technology products for the purpose of teleworking and remote learning in the short-term.

'Government removed of all taxes on computers, laptops and tablets on September 5, 2020, in time for the re-opening of all schools and educational institutions. And in 2021, AMCHAM called for the operationalize a T&T High Commission in Georgetown to further T&T's national interests, with a focus on economic diplomacy and trade promotion, as Guyana is projected to be the fastest growing economy in the Western Hemisphere over the next decade and in May 2022, a high commissioner was appointed.

Trinidad and Tobago Manufacturers' Association (TTMA) has noted the continued thrust toward diversification of the economy and increased support the Government has given to the manufacturing sector in each successive budget.

'The movement away from traditional oil and gas revenue is welcomed but has been gradual. While we appreciate this move toward diversification, TTMA hopes the trajectory of investment into manufacturing continues and a more concerted effort is made to move away from the economy's reliance on the energy sector to generate economic growth and development. The Energy Sector continues to be a very important one for the country, however, better use of the finite resources from this sector must be made to diversify and grow the economy; readying ourselves for the inevitable depletion of fossil fuel,' TTMA explained.

Specifically, with respect to the question on the 7 budgets presented by the Government, TTMA said it must be noted that over the last three iterations of the budget, inclusive of this year's presentation, T&T would have faced the COVID-19 pandemic that took its toll on the economics of the country.

'The challenges the pandemic brought to T&T allowed for the curtailment in the Government's and TTMA's plan for export-led growth. Thus, the last two budgets were primarily geared toward the sustainability of lives and livelihoods in the country, expectedly so, and 2022/23 budget reading may justifiable follow this script. TTMA remains optimistic that the Government will balance the securing of lives with maintenance and growth of livelihoods in this coming fiscal,' It outlined.

TTMA added that several of its recommendations over the years have been implemented such as the Government's commitment in 2020 to support the association's strategic plan to double exports by 2024/2025. 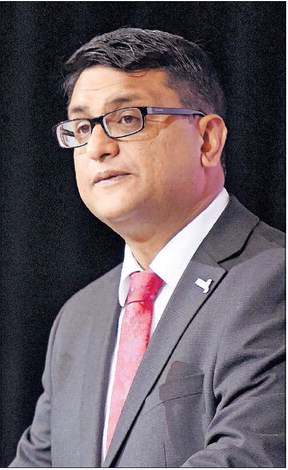 Chief executive of the American Chamber of Commerce (AMCHAM) in T&T, Nirad Tewarie.